China Is Undermining the US Through Elite Capture.... 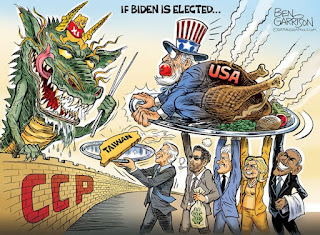 The United States is currently traveling down a losing path in its battle against China because the communist regime has co-opted many American elites in Washington, Wall Street, corporate America, and the U.S. tech sector, warned author Peter Schweizer.
Schweizer, who recently released his new book “Red-Handed: How American Elites Get Rich Helping China Win,” said that his book shows how appalling it is that some of the elites have been willing to “kowtow to the regime” just so that they have access to the Chinese market.

“They should be embarrassed,” he added. “They seem to be all too happy to do the bidding for Beijing when it comes to American politics.”
Full Article: https://www.ntd.com/china-is-undermining-the-us-through-elite-capture-author_734021.html?utm_source=newsletter&utm_medium=email&utm_campaign=2021-10-20
at March 17, 2022