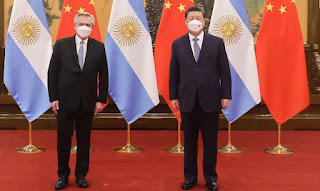 Beijing announced its support for Buenos Aires’ territorial claims over the Falklands as it welcomed the country into its Belt and Road project. (The Guardian)

The move triggered UK Foreign Minister Liz Truss who tweeted, “The Falklands are part of the British family, and we will defend their right to self-determination.”